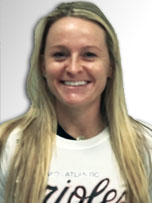 She ranks in the top five in eight other categories, including second in batting average (.368), hits (246), slugging (.653) and on-base percentage (.429), and home runs (41). Kristen is ranked in the Big South’s top-10 in home runs, hits, doubles and runs scored. She was a three-time Big South First Team selection and is also the first Radford female student-athlete to be drafted by a professional organization (Chicago Bandits, NPF).